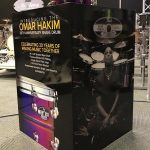 Omar Celebrates 30 Years as a Pearl Drums Artist with the release of his new 30th Anniversary Signature Snare Drum.

I am proud to say that I’ve been a Pearl Artist for 30 years and to commemorate that Milestone I collaborated with my colleagues at Pearl to design a truly one of a kind snare drum of beauty and tonal excellence! They will be available soon as a Limited Edition collectors item! Order yours today!!

Here’s the official press release from my friends at Pearl Drums:
With over 500 albums to his recording credit, master groovesmith Omar Hakim’s drumming voice is saught after and respected. As 2017 marks 30 years of Pearl Drums being part of that voice, Omar’s new 30th Anniversary Limited Edition Signature Snare celebrates the back-story while looking to the future with bold new purpose.

“Part of the magic of the recording environment is knowing what elements to bring to the table to craft something great,” Omar states. “This new snare represents a similar approach: combining familiar elements together for a totally fresh result.”

“As one that has played a fair amount of Pearl drums in the past three decades,” Omar adds, “I’m honored to add this one to my tonal palette.”